A Maze of Reviews 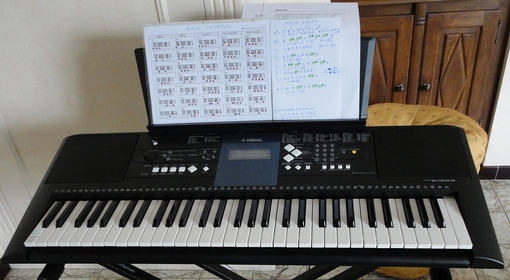 This keyboard is one of the best things I've ever bought ! And talk about value for money ... it certainly compares favourably with most other musical instruments, electric guitars and the like. Since it arrived, four months ago, it has been put to daily use by at least two of us and we are not even close to discovering all that it can do. I had looked at (and nearly bought) the Yamaha NP31 Portable Keyboard  and, if the intended user had been a child learning to play piano, it would have been a great choice. As it is, we are all adults with no previous experience and no expectations of becoming classical pianists, so we thought we might as well get something that would be more "fun" than just a piano. And fun it certainly is!   There are 497 voices - the vast majority are sampled instruments but some are actual sounds, like a clap of thunder, a dog's bark, a door slamming. My only complaint here was that the XG voices (Yamaha specific) are generally much lower in volume than the main instruments. However, I have found a fix for this: if you turn off the “Touch” option, the voices are louder (how much depends on the voice). In any case, the “Touch” feature is only really applicable to the piano voices, so now I leave it off. Note that when you press the “Portable Grand” button, it automatically turns on the “Touch” feature.

The "Play with Style" function is really fun and it means anyone can sit down and mess around with the keyboard while a pre-selected accompaniment plays along. You can speed up or slow down the tempo, have a range of appropriate instruments or just the percussion ones to provide the beat and there are tons of pre-set styles to choose from. It's difficult to describe but really easy to do and it really feels like making music, even if you can't play a scale or name a note. The "Music Database" is a separate function but works generally along the same lines. Again there are hundreds of possibilities.

If you want to get serious learning to play (and this keyboard is really a self-teaching tool), there is a Chord Dictionary which will show you which keys to press to make a chord for each note you define. There are 102 built-in songs (and more you can buy) divided in progressive steps, which are really drills to teach you chords or progressions of notes. Even though the available songs are a bit cheesy and old-fashioned, I found that it's worth exploring the steps anyway as they are often arranged in surprising ways. For example, "Twinkle Twinkle Little Star" is available in Basic and Advanced versions. The Basic uses single keys, although in combinations requiring both right and left handed play, while the Advanced is really quite intricate and well beyond my current ability; however, the progressive steps are challenging but do-able and some are arranged in a jazzy style that makes the melody totally unrecognizable and a lot less cheesy.

You can record your own playing (up to five "songs" at a time) to the internal memory and even if you don't have the cables and equipment to convert your recordings to MIDI or whatever format a musician would require to manipulate the sound, it is still an excellent feature. Once you have a recording you are happy with, you can set the keyboard to "play" and record the sound using a microphone, the advantage being that you would be recording pure sound without the accidental clicks or noise made by hitting the keys with your nails, or whatever.

There is so much to this instrument that it's impossible to cover everything in a review like this, but I can say that the quality of sound is surprisingly good, it's a well-made, solid but light keyboard, it works right out of the box with the enclosed AC adapter and is proving to be a daily addiction of the best kind.
Powered by