A Maze of Reviews
Auna sell packages that include the stand and pop filter, so choose according to what extra accessories you require.  After a lot of comparison and experimentation, this is now my husband's favourite mic and the one he goes to first, both for vocal dubbing and to record guitar and keyboards. He's really impressed and very happy with the sound results he can get. I was sent this microphone for testing purposes and for my honest and unbiased review. In my opinion, it is a terrific condenser microphone at a very reasonable price. 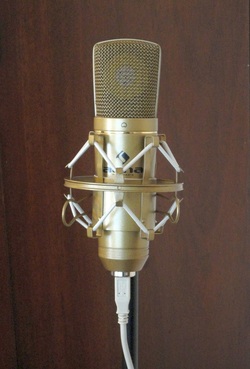 Compared with his Behringer C-1U, this Auna model picks up sound in a much more efficient way, i.e. you don't have to be quite so close to it to produce a very acceptable volume level. This is confirmed by the uptake on Audacity which automatically sets at 40% whereas with the Behringer it would automatically set at around 80%.

You get a very clean sound with a warm, smooth tone from both voice and music recording, ready to be manipulated to suit your purposes. The mellow sound you get is almost too round for his style of vocals, but it's fantastic for guitar and keyboard recording, picking up all nuances while effectively excluding background noise.

We love the look and feel of the CM600. It's fairly heavy, very attractive in this bronze colour, substantial, and with an air of quality about it. The cradle clip holds the mic securely at whatever angle and provides shock absorption.

Through the USB connection, the mic draws phantom power from the computer it is attached to (a faint blue LED light shows through the mesh). We have tested this mic in different ways, as my video illustrates, and are very impressed with the performance and results one can get. My musico still has a use for his Behringer, but the Auna has become his favourite mic for guitar and keyboard live recording.

We were given this microphone for testing purposes and for our honest and unbiased review. In our opinion, it is a quality microphone at a very reasonable price.
Also, when I contacted Behringer, they suggested using ASIO4ALL which is an independent universal audio driver for Windows systems. For us it made all the difference and my hubby is now very happy with the recording sound quality he gets. Asio4all is free software which (as I understand it) basically improves the way most computer sound cards work. One thing that puzzled us was that the LED light indicating that phantom power is being received is always green on the mic (we have tried it in 8 different USB ports on 2 different computers) whereas the documentation says it should be blue. I originally thought this indicated insufficient power from the USB port but it seems to have no effect on recording. With his current set-up, my husband is happy with the sound he is getting, there is no hiss and, of course, you've got to love the ease of the USB connection.
Powered by